Ok, so I blogged about a few things that I would like to get in 2014. Well there have been a few updates.
To start with, I bought a new camera, but it wasn’t the Fuji X-E2 that I wanted. Instead I settled for a different model in the fuji range, the X-Pro1.
There was a great offer on it that made it a no brainer when you looked at what you got for your money against the fuji X-E2. Ok, so it isn’t the latest and greatest model in the range, it’s not even the flagship model anymore since the X-T1 was released but it is an amazing camera. It came with an 18mm f2 lens, a free, yes that’s right, free, 35mm f1.4 lens and I also went for the 55-200 zoom too. All in all, a very capable package and providing I sell my Sony DSLR gear for the prices I thinking can get, I’ll have some cash left over after paying the good old credit card off too. Result.

Next is the car. I deliberated long and hard over whether to get a Subaru Outback, and unfortunately the fuel economy and the fact that I deliberated for so long, all the local ones to me had been sold. So instead I chose a different, slightly more controversial car.
By controversial, I mean that I’m getting a lot of stick from my mates about it. Mainly that I’m not old enough to own one. Which is odd because usually they refer to my age as being really old quite often. Anyway, I’ve bought a Volvo V50 D5 Geartronic and I’m very happy with my choice, despite what others might say.

So there you go, exciting news wasn’t it? 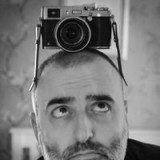 I'm Head Of UX Development at The Hut Group and responsible for a team of UX Developers, Front End Developers and JS Developers. It's awesome. I also do a bit of photography too and I'm tall grey and beardy.

This site uses Akismet to reduce spam. Learn how your comment data is processed.